So you’ve just started a new server, modified it to your liking and are ready to host some additional players and build a community. The next step is to advertise your server in order to attract new players.As far as Minecraft servers go, the environment is very competitive when it comes to building a player-base. There are countless numbers of servers competing for new users and offering unique features to differentiate themselves. It is important that you offer a fun and unique experience to players so that they will keep coming back.Below we will go over some of the best ways to find new players.1. Server ListsOne of the easiest and most effective ways to find new players is through server lists. Server lists are websites that allow you to list your server and what it has to offer alongside other servers. Players often visit server lists when they are looking for new servers to play on.Here is a list of some of the most popular Minecraft server lists:https://minecraft-server-list.com/https://minecraftservers.org/https://minecraft-server.net/https://minecraft-list.org/https://topg.org/Minecrafthttps://www.trackyserver.com/minecraft-serverhttps://minecraftlist.org/https://serverlist.games/game/Minecrafthttps://minebrowse.com/https://minecraft.buzz/https://list-minecraft-server.comhttps://mcservertime.comhttps://mc-servers.com/https://bestservers.com/https://minestatus.net/Many of these server lists have a section for new servers, so you’ll likely start seeing new players join as soon as you list your server. This won’t last forever though as more new servers get added and push you down that list. In order to stay visible and attract more players, there’s a few additional steps you can take.Make a BannerA vast majority of server lists offer you the ability to add a banner to your listing. These banners are typically 468×60 pixels in size and can play an important role in making your server stand out.You’ll either want to create your own banner or hire a designer to make you a banner that showcases your server’s name and features. This will be the first thing that potential players see when viewing your listing so you’ll want to make sure that it is flashy and informative.If you are lacking skills in the graphic design department and don’t want to pay for a designer, here are some free banner generation tools that you can use:https://topg.org/minecraft_banner_makerhttps://minecraftlist.org/minecraft-banner-makerVotifierAnother way to make the most out of server lists is using the Votifier plugin. Votifier is a plugin compatible with Bukkit/Spigot that enables your players to vote for your server on server listing websites. When they vote, you can even configure the plugin to offer the player some sort of reward in game, such as a rank or an item.When players vote for your server on server list websites, this increases your ranking, which thus increases your visibility and potential to find new players.2. YouTube & TwitchIf you are a YouTube / Twitch content creator or have a friend who is, you can leverage this to increase your player-base. Let’s Plays and series related to specific Minecraft servers can garner a massive amount of views. If the viewers see you playing on the server and having a good time, they will want to join in too! 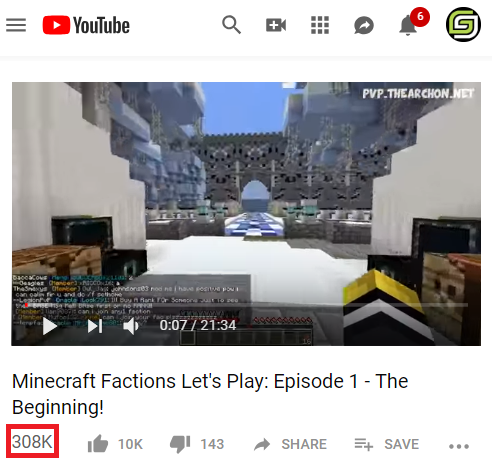 Creating good content for YouTube is a difficult topic to navigate and there isn’t any shortcut to success. Starting small and making an effort to entertain viewers as well as showcase your server is not a bad idea though – it can still bring in some new players and offers a unique way to show what you have to offer.Similarly on Twitch, if you are live streaming on your server this will encourage your viewers to join and get in on the action. It is a great way to engage your audience and gain more players.If you are not a content creator, it is always a good idea to offer incentives to YouTubers / Streamers who may be interested in playing on your server. If they are playing on your server and creating videos or streaming, you can still take advantage of the benefits listed above.3. ForumsThere are several Minecraft-related forums out there that offer you the opportunity to advertise your server. Some of these forums have sections specific to recruiting new players.Here is a few of the popular forums / message boards that allow you to advertise your server:https://www.minecraftforum.net/forums/servers-java-edition/server-recruitmenthttps://www.planetminecraft.com/forums/minecraft/servers/https://www.reddit.com/r/mcservers/Outside of explicitly advertising your server, you can also gain new players by being active in these communities and other similar communities. If you are a contributing member who provides quality content, mentioning your server in your username or forums signature is not a bad idea (so long as it is within the rules of the specific forums). Others will see that you are knowledgeable/helpful and will be more inclined to join your server.4. DiscordDiscord is another great way to find new players as well as keeping up with your current player-base. It is a good idea to create a Discord server for your Minecraft server’s community so that you can keep in touch with your players even when they are not logged in to the game. This can help to retain the players you already have and keep them engaged.You can also use Discord to find new players. There are several Discord servers that allow you to advertise your Minecraft server, some even allow you to advertise your own Discord server.We recommend using Disboard to both list your own Discord server as well as find other Discord servers that may let you advertise your Minecraft server.

Be A Good Community Figure! Don't advertise your server where advertising isn't allowed.